Cllr Caroline Mott is serving a second year as Mayor for West Devon Borough Council, having been voted in by councillors today (Tuesday 24 May) at Annual Council. 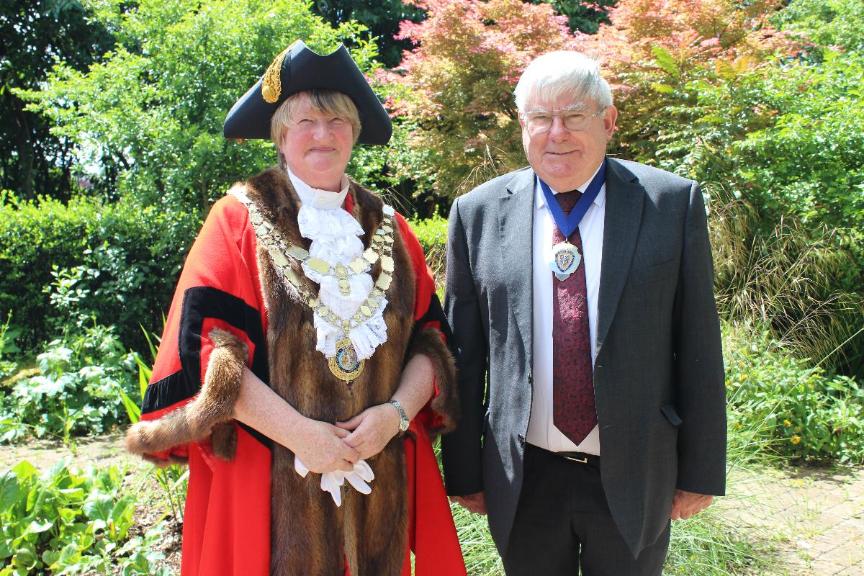 Cllr Mott from the Bridestowe Ward accepted the chain of office for a second consecutive term.

First elected to the Borough Council in 2015, Cllr Mott lives and works on her family dairy and cattle farm, in Bridestowe.

Cllr Mott serves on the Development Management and Licensing Committee and is the Council's lead Hub Committee Member for the Built Environment. Outside of her immediate Borough Council work, her work extends to serving on the Cornwall and West Devon Mining Landscape World Heritage Site Partnership and the Devon Authorities Strategic Waste Committee.

After being voted in for a second term, Cllr Mott said: "It truly has been an honour to represent the borough through what has proven to be an interesting year. We started with gently easing our way out of the various restrictions, with its social distancing and masks being worn to today, with the first meeting allowing full access to guests and visitors. At this point I would like to welcome our past Mayors to the meeting - thank you for your attendance.

"While the year started slowly, invitations soon started to arrive and I have attended a wide variety of activities. It is always a joy to meet new people and hear tales of why they do what they do.

"It has included judging hanging baskets in Okehampton, a walkabout in Bere Ferrers, art exhibitions and cricket. I have dressed in a variety of outfits, from the formal for civic events ,to Victorian for the 150 year celebration of the Okehampton Railway; all of them showcasing what a wonderful place and community we have here in West Devon.

"Numerous cups of coffee have been drunk, cakes have been plentiful and scones with dubious jam and cream arrangements. I've mastered the Google Maps app and squeezed my feet back into shoes after two years of wellies. I have laughed and cried along with other representatives from our neighbouring councils and have made firm friends with many of them. You do eventually get used to people peering at your mid-section asking, 'And you are?'

"None of this, of course, is possible without a good team behind you. First and foremost, I wish to thank my husband, Kevin. While he hasn't always been able to attend events, he has always been there to look after our daughter, cook tea, offer coffee and wine when needed, all on top of running a busy farm. His support, along with that of my family, has been unwavering and for that I give my heartfelt thanks. I'm sorry - your culinary skills will be needed for a while longer!

"I also wish to thank a few other people for their support this year. For the officers who work behind the scenes and ensure I get to events on the right day at the right time, in particular Kathy Hoare, who has chivvied and chased to ensure everything went mostly to plan. My Chaplin for the year, Rev Adrian Brook - your gentle presence and humour has been comforting.

"Also, Cllr Pearce, my thanks to you for your support. It has been reassuring to know you were there when needed.

"My charity this year was the Farming Community Network. They have seen a huge increase in calls for support over the past year, especially from the younger age group. They continue to provide a safe environment in which to talk and express their worries or concerns. With the issues facing our rural community this need is only going to increase.

"I have great pleasure in announcing that we have raised £3,500 for the FCN, plus donations from the woolly hats left at the local markets. I intend to make more through the summer, as I have been told they have been very successful, so if anyone would like to donate wool or even hats, I would be extremely grateful.

"This fantastic amount wouldn't have been possible without the businesses who sponsored my golf match, the Pink Ladies and Everything Okehampton who allowed me to join with them for a gala weekend and the auctioneers who ran an antique 'call my bluff' evening. There were also quizzes, coffee mornings and raffles, with donations for prizes."

She was born in Okehampton and started her working life on the Whiddon Down to Okehampton Bypass as a materials engineer. This led to her working across the country before returning to Sourton. She was a school governor for 14 years and on the parish council for 12.

She has four children, all still living in the West Devon area. When not carrying out her responsibilities for the Council or working on the farm, Cllr Mott is a keen volunteer, setting up Bridestowe's volunteer group that keeps the village and surrounding area clean, while she is also a member of the local Speedwatch group. She also enjoys knitting and patchwork.

Cllr Terry Pearce, Ward Member for Mary Tavy, has remained as Deputy Mayor of the Council for a second term.

The following committee positions were confirmed during the Council meeting.

Cllr Mott has invited members of the public to nominate a new Mayor's charity for 2022/23. If you have a charity in mind that could benefit from the support of the West Devon Mayor for the year ahead, send an email to cllr.caroline.mott@swdevon.gov.uk by 30 June.

For more information on new appointments to Council committees go to: www.westdevon.gov.uk/Committees